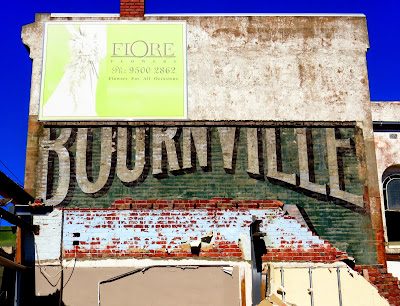 I nearly peed my pants with excitement when I spotted this ghost sign in Armadale this afternoon. I had half an hour to kill so I wandered along High Street looking for old signs. I saw a few relatively unremarkable examples and then BAM! I spotted this brilliant Bournville cocoa sign. It's one of those extra special ghost signs which have been revealed to the world again temporarily by demolition works.

We went to an ace toy store, Honeybee Toys, in nearby Malvern to buy Christmas presents for Luke's niece and nephews. We had fun playing with the the musical instruments and finger/hand puppets - they had tortoises, a hairy spider, a big brown bat, a little black bat, a bumble bee, and a T-Rex with hilariously feeble arms that were just flaps of fabric. We bought Space Hoppers and a music box.