I'm not much into dance or electronica, but this Chemical Brothers song is an old favourite. It popped up on my iPod on Friday and I've been listening to it ever since...well, mostly just the first minute or so of it over and over to hear the bit (at about the 38 second mark) where the base kicks in. I have new, better quality earphones and the bass sounds ah-mazing. 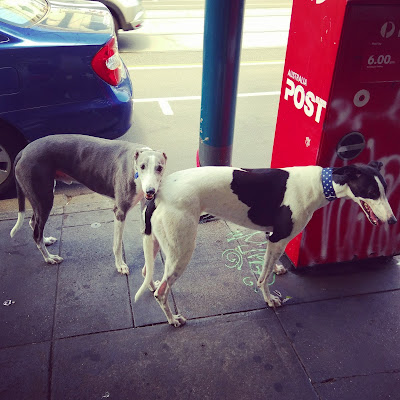 A pair of greyhounds on Chapel Street
Posted by Jayne at 10:02 PM No comments: Links to this post 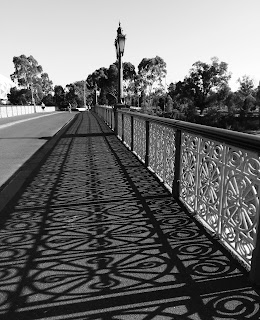 Crossing 'my' bridge this morning

I forgot to mention in my previous post that I have also revived my habit of walking home from work, which is only the habit requiring the most energy to achieve of all my new 2017 habits (albeit on only four days of the week).


At some stage - when I'm getting up early enough and I have more energy - I will start walking to work in the morning as well, like I used to in the old days before my work moved to the west end of the city (and thus a little further from home). A walk along the river into the city really is a much better way to start the day than crowding onto a tram like sheep.


But for now I'm quite enjoying not catching the tram home after work (even on hot days) and getting a 45 minute walk in without really feeling like I'm making an effort to exercise.


Sometimes I walk on the south side of the river and sometimes on the north side, which is nice on hot days because there's a no-bikes-allowed path which is very shady and less busy. One day I detoured for the final part of the walk through the north end of the Botanic Gardens, which was very pleasant (even though as I walked from the Tan track to the garden gate I found myself amid a group of people much older than I who were all jogging up and down the incline while I dragged my sore/weary body up it...and then had to have a small lie down when I got home.)


I'm still doing well on getting up earlier. The last couple of days I've been tempted to hit the snooze button and stay in bed a bit longer because I haven't been sleeping as well, but I didn't! Go, me! I've been talking myself into just getting up and getting on with it. I really want those ticks! I'm still surprised how such a simple thing is motivating me so effectively, especially as it's private - I'm not accountable to anyone; it's just me and the list.

Posted by Jayne at 9:39 PM No comments: Links to this post

All of these (good and) bad habits

Last Monday I decided to get my act together to overcome some of my bad habits, revive some old habits and develop some new ones. Instead of just deciding to get up earlier, exercise more, read more and nap less, and then just muddling my way through, I've gone and got all systematic about it.

Nothing complicated - I have a list of all the habits and I get a tick for every day that I do what I'm meant do (or don't do what I'm trying not to do).  I know that sounds tedious, but I like seeing the ticks piling up and missing out on a tick does motivate me to do better.

So far I'm doing a good job of getting up earlier (and getting to work early), walking 10,000+ steps a day, rebounding for 15 minutes most days, stretching, reading a book before bed (instead of the internet), flossing and not whining on social media. I'm doing a reasonable job of not napping  - I was doing well until an epic nap on Sunday.

I'd like to say I feel great, but actually I'm utterly exhausted (and I'm not even waking up earlier!) and my body feels sore and stiff. Mentally though, it feels good to be taking action to get my crap together, and I'm pleased with my progress so far.

I really do function better with routine. Boring, but true.

Posted by Jayne at 9:28 PM No comments: Links to this post

A hot, but beautiful, day out

Luke and I visited the Blue Lotus Water Garden at Yarra Junction on the weekend. I didn't even know it existed until a few weeks ago when I saw a post about in on Facebook, which seems bizarre to me. I've lived in Melbourne a long time and it's been open for around for 10 years (although I think it's only open to the public during lotus season, which starts late December).

I love visiting the Yarra Valley/Yarra Ranges. It's just so pretty with the blue mountains lining the horizon and the (still) green fields dotted with hay rolls or lined with vineyards. I feel my yearning for a tree change rising every time we're there. (Have I mentioned before that Luke and I have been thinking of moving to the country - or back to the country, in my case - at some stage? No particular place in mind as yet.)

Anyway, the garden is beautiful. The many ponds are brimming with flowers. It was stinking hot, especially in the greenhouses, but that did not deter us. Here are some of my many photos: 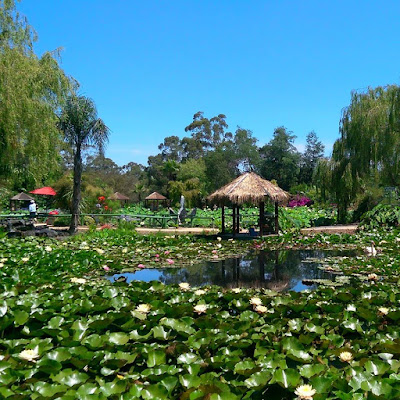 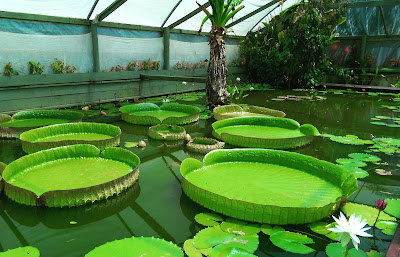 
The lilies above are the world's largest water lily, Victoria Amazonica. The lily pads regularly grow to more than 1.2 metres across, with one said to have measured 3 metres in diameter! These ones were big, but probably a bit less than a metre wide. 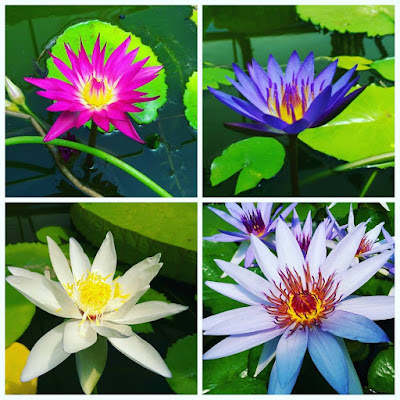 A selection of the many water lilies on show 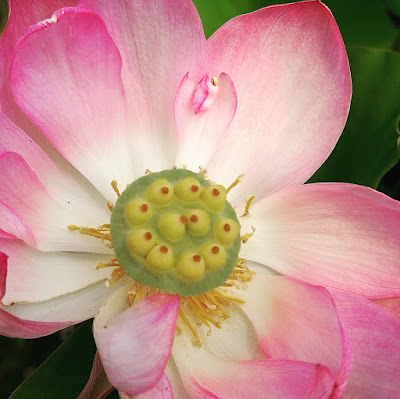 The centre of a lotus 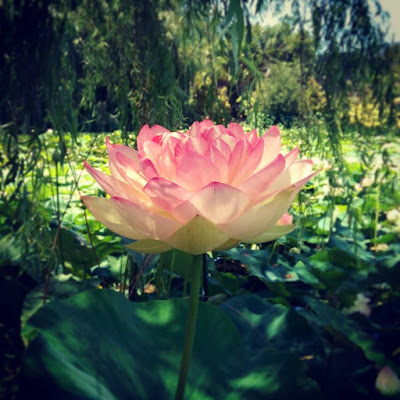 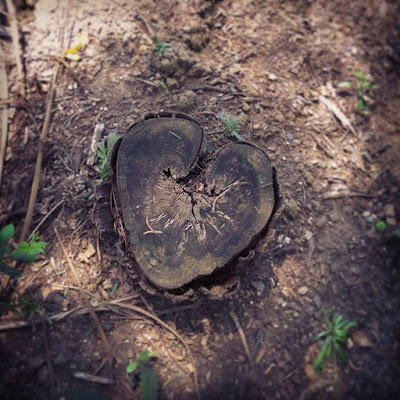 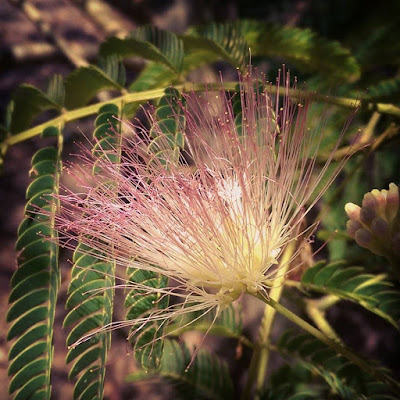 The flower of the silk tree 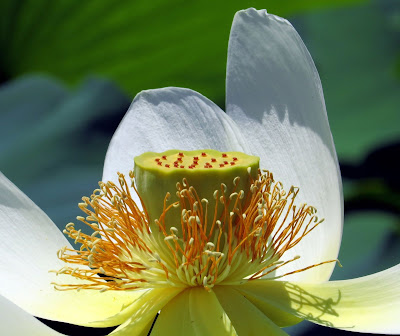 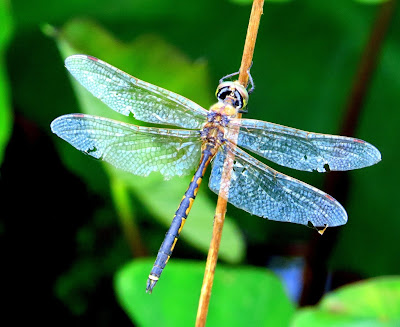 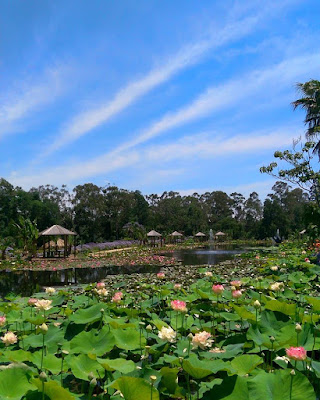 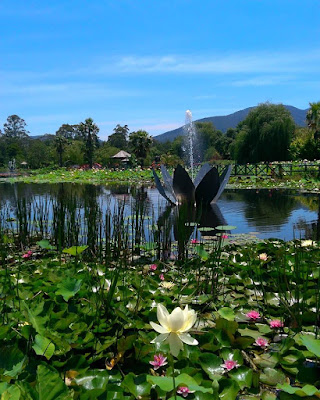 After the lotus garden we decided to visit the William Ricketts Sanctuary in the Dandenongs. Despite visiting the Dandenongs many times, I've never bothered to visit the sanctuary before. The shady, ferny pathways dotted with sculptures were a welcome respite from the searing heat of earlier in the day. 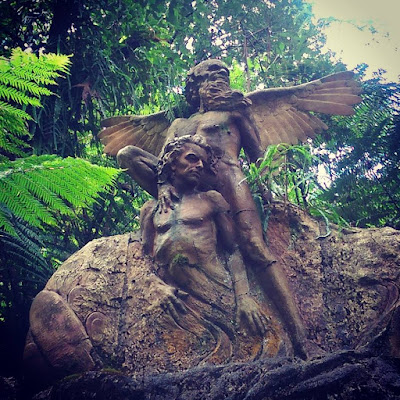 My favourite of the statues 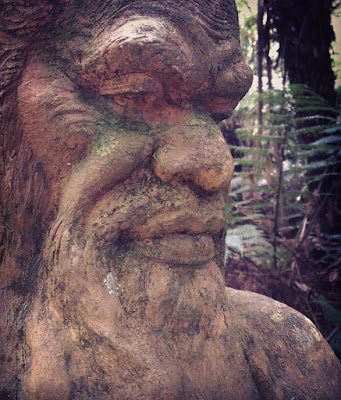 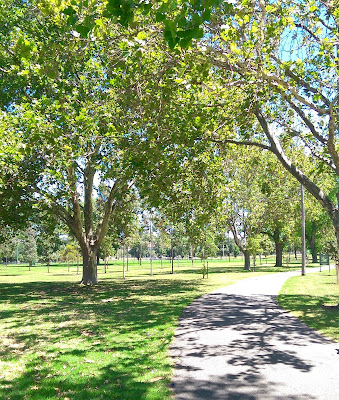 My first working week of the year is over! Wooh! OK, so it was only two days...and I didn't have a lot to do...but I feel as if I've worked a full week. I'm still not grumpy though, just exhausted. Now for three days off. I don't have anything planned, except for movies with a friend on Sunday. Oh, and planning my goals for the year ahead. Yes, I'm planning to plan. I need to get some shit sorted this year.

I forgot to mention in my last post that I achieved my initial no-shopping challenge: to go from 1 June to 31 December 2016 without buying shoes, clothes or accessories. Yep, I did it! Go, me! In the end, it wasn't a particularly challenging challenge, so extending it for a full year (which I decided do a month or so ago) was an obvious next step. I have a few more challenging challenges planned for this year!

The cool breeze coming through my loungeroom window is delightful. Summer has finally arrived, but I won't complain about the heat (especially because today wasn't that hot).

Posted by Jayne at 9:52 PM No comments: Links to this post

Back to work...and not even grumpy

I'm back at work today so I thought I should use that return to routine to slip back into the blogging saddle again.

Surprisingly, going back to work after about 11 days off did not put me in a bad mood. That's what happens when you like you job and your boss and co-workers, I suppose. I think it also has something to do with the fact Luke and I didn't go on our annual New Year road trip this year so my time off was less exciting, but more relaxing. (We do plan to to hit the road at some stage soonish). Perhaps my unusually upbeat mood is also related to only having to work two days this week. I might pull on the cranky pants next Monday.

As I walked to the tram stop this morning part of me thought it was actually nice to get back into a routine. It feels boring to say it - oh god, I'm not freewheeling and spontaneous! - but it's true. Being back at work at least forces me to get out of bed at a decent hour, leave the house and stay awake all day! I eat at regular times and I plan ahead for my snacks and lunches on workdays.

I had a lovely six days with my mum. The sun shone, there was pavlova and gin n tonics, and we had a nice mix of relaxing and getting out and about.

We spent Christmas day with a group of mum's friends. It was the first time I'd met them and they were great fun. The afternoon featured games and singing. Pam, who hosted the lunch, has the cutest dog ever, Pippa. 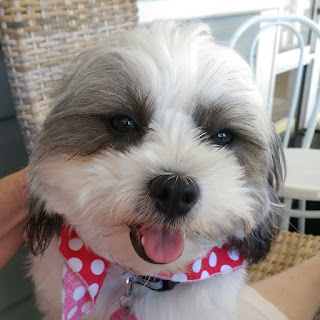 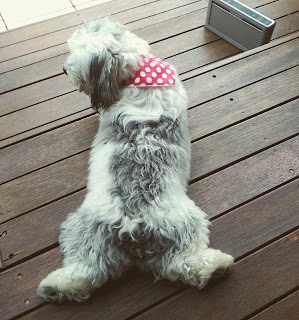 During the night times, Mum and I played three games of Scrabble and three games of cards (rummy, to be precise), but I only managed to win one of each, and then only just (I won the Scrabble game by two points!). I love Scrabble but I only ever play it with mum. Luke won't play with me because he thinks he's no good at it. 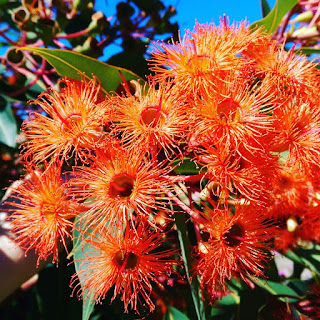 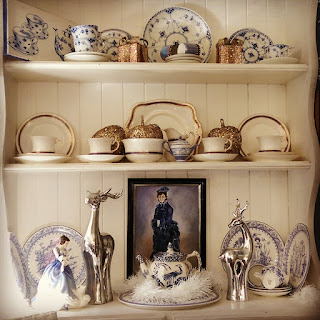 On my final full day we drove up to the Wild Bull picnic ground in the Cobrabald State Forest, which was a picturesque (but bumpy) drive through farmland and forest. It was a hot day, so we cooled off in the swimming hole. It was fantastic. I swam right across the (not very wide river) and didn't let my mind wander to what might be in the depths where I couldn't see the bottom. 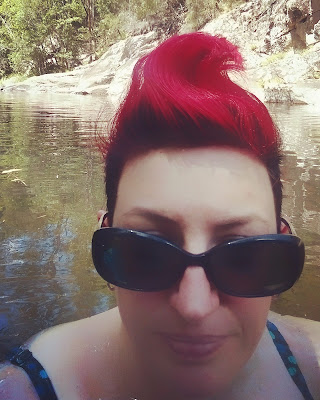 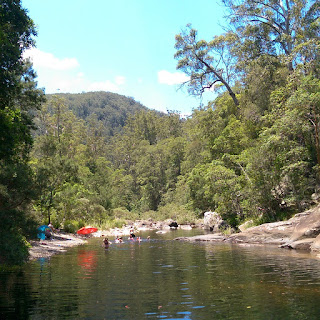 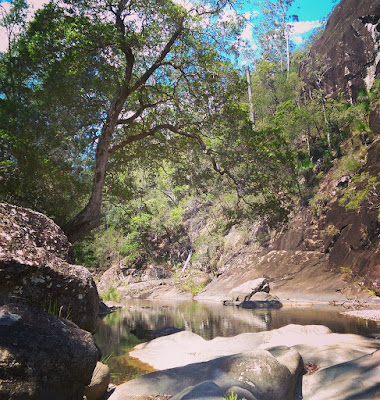 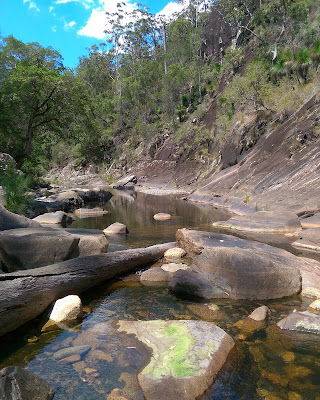 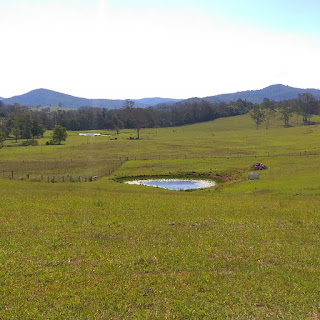 On the way home 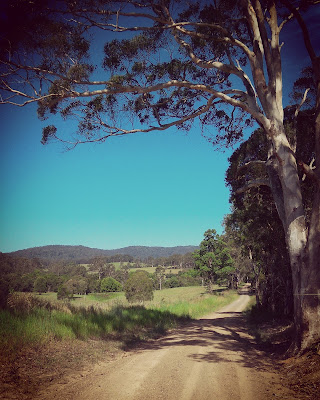 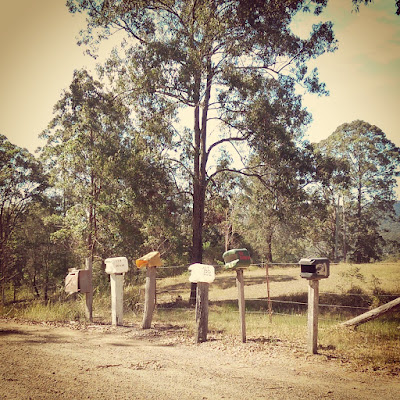 Golden hour on the Hastings River at Wauchope 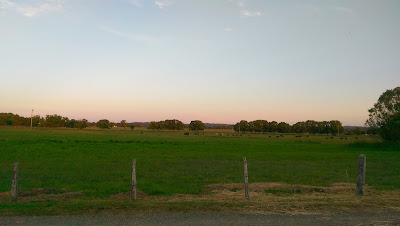 Over mum's back fence

I ended having longer with mum than planned because we arrived at the airport for my flight home after check in had closed. Whoops. I managed to get a seat on a flight three hours later at no extra cost. We went killed the time by having breakfast beside the harbor. We sat on the balcony and I was thrilled with all the fish in the water below. 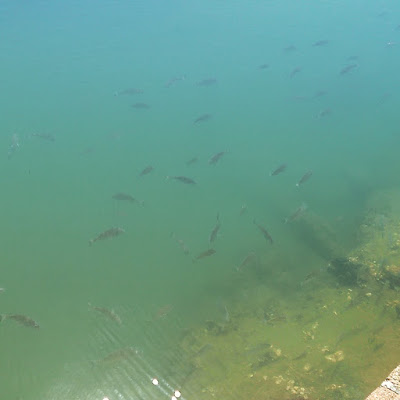 Posted by Jayne at 9:42 PM 2 comments: Links to this post