I'm participating in National Blog Posting Month again for the third year running. I've been a slack blogger lately, so I thought I'd give myself a kickstart with NaBloPoMo. Prepare for the daily bombardment of glee from Tuesday.

I had a nice sleep in this morning and stayed in bed for a while listening to the rain. Then I got up and went to the gym. Go, me! I've been back at the gym for about three weeks and it's amazing how much better I feel - more energetic, less sluggish and far less stiff and sore in the back and joints.  And that's just from two 45 minute sessions a week of stretching, core work and weights. Nothing overly strenuous at all.

The Zombie Walk lurched through the city this afternoon. There were thousands of them. 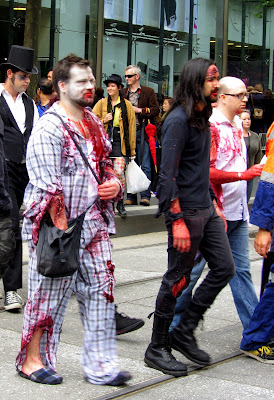 As a result, this guy at the ATM didn't really raise any eyebrows. He might have been doing the walk of shame after a Halloween party. 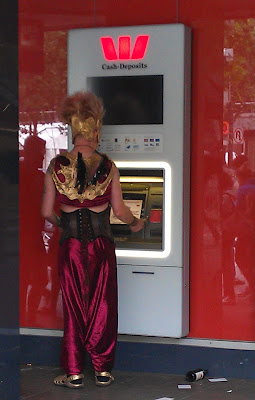 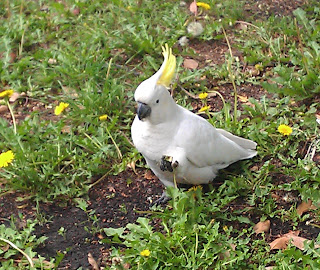 Polly has resorted to begging by the road side for crackers
Posted by Jayne at 5:50 PM No comments: Links to this post 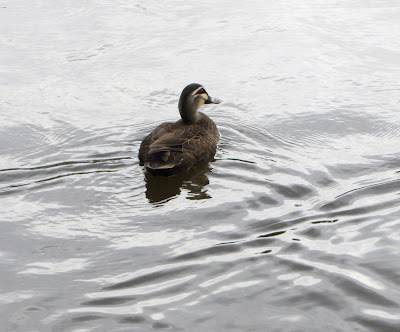 Camera shy duck turns his back on me 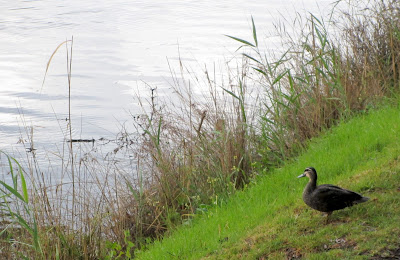 Indecisive duck ponders a swim in the rain-swollen river 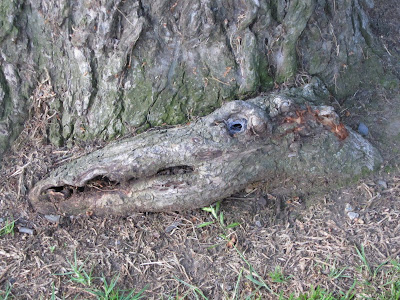 Tree roots shaped like a pterodactyl or a very ugly bird
Posted by Jayne at 11:49 AM 2 comments: Links to this post 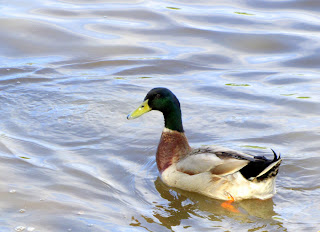 There's a new duck in town! I spotted this big duck hanging out with a pair of little wood ducks on the Yarra when I walked into the city today.

I went to the gym, the first time I've worked out on Sunday in ages. Quite pleased with myself. If I can just keep it up...

After the gym and lunch,  I walked to Lygon Street to see the last leg of the Herald-Sun Tour bike race. Luke couldn't go, so I went for him. I never paid much attention to professional cycling until I started seeing Luke, but I found it quite exciting when the stream of cyclists zoomed past me. I took many photos.

I spotted some more old signs in Carlton: 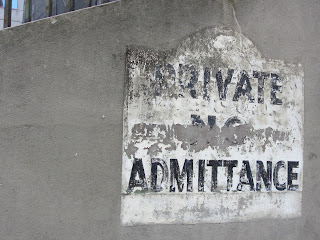 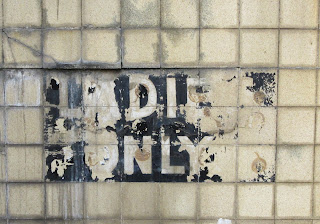 Entrance to the old underground public toilets
on Faraday Street 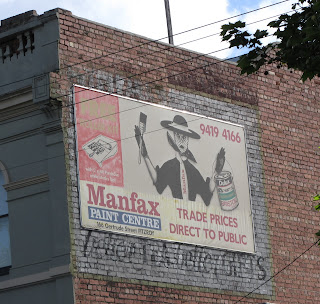 Rathdowne Street. Can't quite make out what the old sign says... 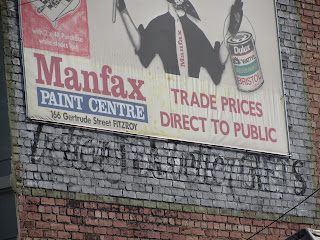 Better [something] better gifts?
Posted by Jayne at 8:20 PM 2 comments: Links to this post 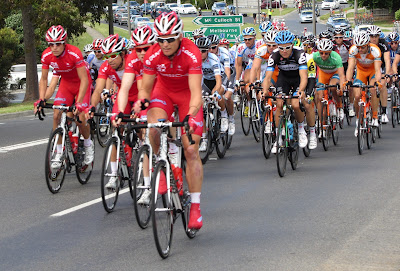 Why, yes, that is the peloton.


Luke and I went for a drive down the Mornington Peninsula today, mostly to see a little of the Herald-Sun tour cycle race. And we did see a little - they whizzed past in a flash of lycra at Dromana and were gone in seconds. First there was a break-away group of about four cyclists vying for the lead, then one lonely guy riding on his own, and then the mass of the peloton. (Yes, I'm pretending I use the word peloton all the time).

We didn't drive all that way just for a few seconds of cycling action though. We had lunch in the sunshine at Mornington beforehand, and afterwards we drove down to Portsea and strolled along the pier. 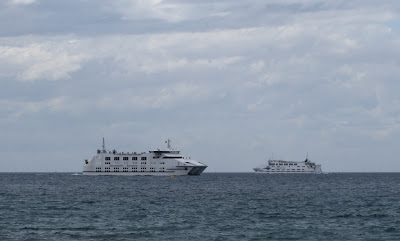 Oh no! The big ferry's gonna crash into the little ferry!

We had an icecream at Sorrento on the way back. My cup of three flavours was eNORmous, but I got through it all. Luke had a sensational lime gelato.

I got photos of some ace old signs: 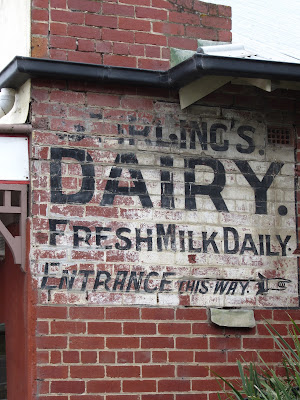 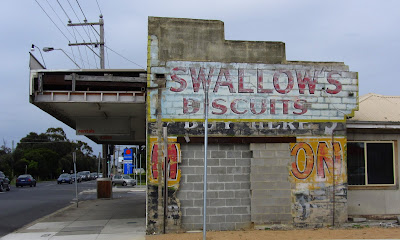 I made Luke turn around and go back so I could take a photo of the second one, which was a bit annoying because it was hard to find a break in the traffic. He's good to me.

Posted by Jayne at 10:02 PM No comments: Links to this post 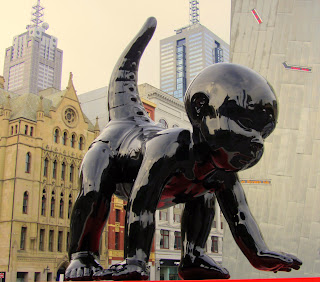 I made granita on Sunday for the first time (it's an Italian Slurpee-style dessert). I made blood orange and lemon flavour, mostly to attempt to recreate the dessert I had at an Italian restaurant late last year which was so delicious I still occasionally think about it. Mine was very tasty - sweet, tangy and tart - and I'm not just saying that myself. Luke also said it was delicious. (He's very effusive and generous with his appreciation of my culinary efforts, which is nice.)

My copy of the new Dr Seuss book, The Bippolo Seed and Other Lost Stories arrived yesterday. It was sitting on my desk when one of the people I work for approached. She asked me who it was for, and I said (a little bashfully) that it was the new addition to my collection. She said, "Oh, cool. I like you even more now." Haha.

The swans mights not have lost their eg after all. Luke and I passed one of the same pair sitting on a new nest on the south bank of the river when we walked into the city on Sunday. But I can't imagine how they could have rescued their egg and moved it to a new nest, and I'm not confident the new nest is above the tide line either. I won't count the eggs until they hatch....

Luke and I checked out the Angels-Demons Parade, which is a collection of giant adorably evil black baby sculptures along Swanston Street as part of the Melbourne Festival. They're simultaneously cute with their chubby hands and feet, and threatening, with their bat wings, spiky tails and the little horns on their heads. I liked them - I enjoy the juxtaposition of opposites. 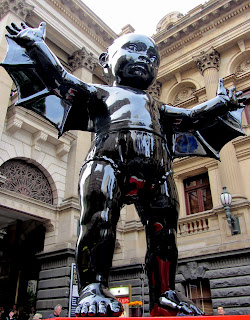 Posted by Jayne at 8:37 PM 2 comments: Links to this post

There's a new Dr Seuss book! It's a called the Bippolo Seed and Other Lost Stories and we Suess fans can thank a dentist with a passion for Dr Seuss, vintage magazines and eBay for this new book. Thank you, mister!   I have already purchased my copy online.

I think I've written about this before, but it's so delicious it bears repeating:  tonic water with fresh lime and passionfruit juice - if you look up "refreshment" in the dictionary, you will see a picture of that beverage right there. Of course  a shot of gin goes nicely too.

I've also mentioned (The Whole) Kit & Caboodle on Adelaide's Three D Radio before, but I'm going to mention that again too, dammit. I've been tuning in to hear Jade and Susie do their thing on Tuesday afternoons for the past couple of weeks and I tell ya, their show is a sure-fire mood-lifter after a long, cranky day at work. They're sexy, smart, funny and engaging as hell,  and the music is super cool. If you like your music with a heavy dose of retro, tune in online at 5.30 (Melbourne time).

Here's one of the new additions to my music library thanks to Jade and Susie: Kim Lenz and Her Jaguars.

* Not-so-gleeful news: the swan pair I wrote about yesterday built their nest below the tide line and it looks as if the river has washed away their egg(s). *sad face*
Posted by Jayne at 10:11 PM 1 comment: Links to this post 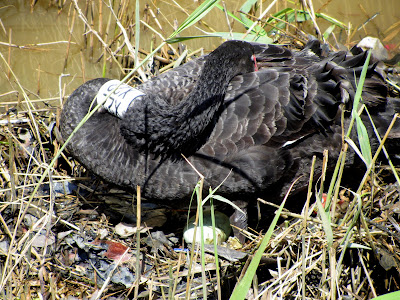 There's a swan baby on the way! Maybe more than one, but only one egg was visible when I walked past the nest, near the um...Swan Street Bridge, on Sunday.

In other news on things I've recently seen near bridges, I spotted this very intricate stone carving beneath the Church Street Bridge on Saturday when I went for a late afternoon walk. You will walk past it if you head down the steps half way across the bridge on the city side. It says, "Victoria...Peace and Prosperity". It's not new obviously... Either I just didn't see it on the one or two other occasions I've walked down those stairs, or it was revealed during the recent lengthy restoration of the bridge. 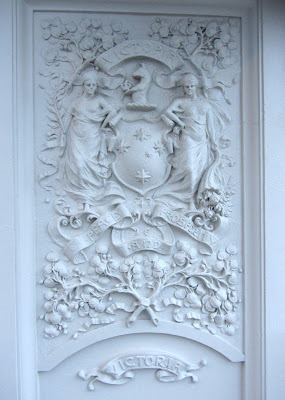 Daylight savings started on the weekend. Yay! It was so nice walking home in proper daylight tonight, even after finishing work at 6.00pm.
Posted by Jayne at 9:42 PM 1 comment: Links to this post