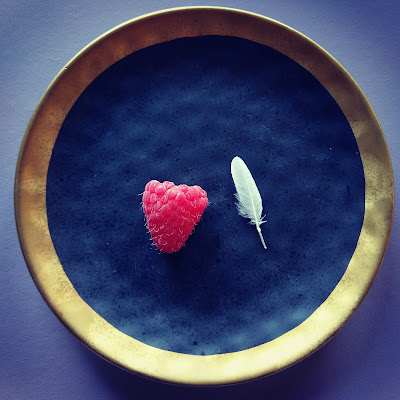 I found a teeny weeny feather on the floor of my kitchen
Posted by Jayne at 6:46 PM No comments: Links to this post

What I've been doing 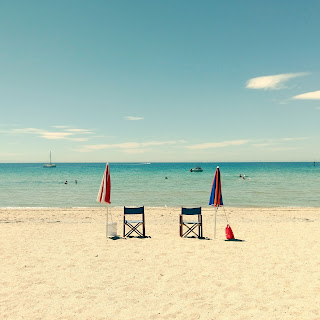 I've been a bad blogger again. It's not that nothing gleeful has happened; I've just had so little energy for the past few weeks that most days I'm basically only working, eating, and sleeping.


Luke and I have done a couple of nice day trips on weekends (Port Arlington and Noojee), but they depleted my battery and there was no energy left over to blog and post photos (except to Instagram because that's quick and effortless).


My current malaise is frustrating because I feel as if I'm doing all the right things to boost my energy  - I'm eating better; I'm getting up earlier and not rushing to get to work; I'm walking to or from the office every day and I'm racking up 10,000 steps nearly every day. And you know what? I FEEL WORSE! I'm physically and mentally exhausted, and I have constant stiffness, aches and pains that seem to be getting worse as I go along. It's not fair. 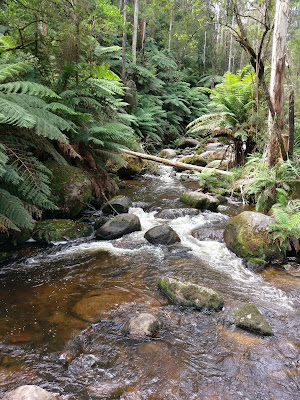 On the way to Toorongo Falls near
Noojee, Gippsland

But enough woe-is-me. I'll see my doctor soon, and in the meantime I'll keep doing what I'm doing because I'm really pleased with how well I'm sticking with my habits. Some of the exercise habits have fallen by the wayside for now because of my lack of energy, but I'm going great guns on some of the other habits.


I'm particularly pleased with my efforts at getting up earlier. Since I started, I've been getting up five minutes earlier each week, and this week I'm rising at 7.25. This gives me enough time to get ready at a leisurely pace and walk to work (also at a leisurely pace), arriving about 5-10 minutes early. At the moment I'm leaving the house only about five minutes later than when I was getting out of bed - or even earlier, since I'd got in the habit of staying in bed until 8.10 at the end of last year.


I'm simultaneously loving and hating being an earlier riser. The moment my alarm goes off I think, "Ugh, I can't do it today. Just one more snooze," but then I just do it and get on with things. I suppose I hate that moment, but I love everything that comes after it.


I'm still surprised I've managed to do it so easily. I love my bed  - ABSOLUTELY LOVE IT - and even when I'm feeling OK, I do not like getting out of it. Previous attempts at getting up earlier - even just 10 minutes earlier - have failed miserably, but I wasn't giving myself 'gold stars' for effort on those occasions. Those gold stars (ticks, whatever) are magic.


Eventually, when I'm getting up early enough, I want to start doing some stretches  - maybe some exercise - in the mornings, and I'm thinking about bringing my starting time forward to 8.30am so I can leave at 5.30pm instead of 6.00. 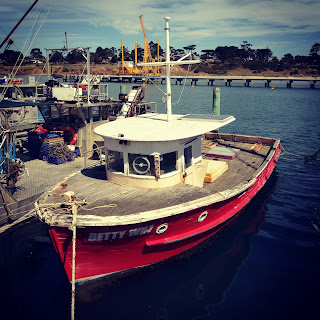 Betty the boat at Portarlington

The other habit I'm totally acing is walking to/from work. I started off walking home from work, but for the past two weeks I've been getting up early enough to work in the mornings. I much prefer the mornings - a walk along the river is a pleasant way to start the day, especially compared with cramped public transport; it's cooler and has that nice new-day freshness about it; I don't have the aches and pains that come with sitting at a desk all day; and the time I arrive at work isn't dependent on the trams running on time.


Since I'm doing well at walking to work, I'm also reaching my daily goal of 10,000 steps. The trek to work accounts for about half of that, and even on the weekends I reach my goal most of days.


Other habits I'm doing well at:


* not complaining on social media (this is really hard some days);
* no negative comments on social media (debate about politics is allowed, just politely); and
* flossing most days (no more lying to the dentist!).


* not eating gluten. Initially I was hopeless at this - I love bread - but I thought it might be why I was feeling so bad, so I stopped a couple of weeks ago and I've been doing a good job of sticking to it. But if cutting gluten out is actually making a difference to how I feel, it's happening at a glacial pace;
* reading before bed every night. Some nights I'm just too tired, which is a decent reason except...
* ...I somehow manage to stare at my phone instead of sleeping, so that's another bad habit I'm not doing a great job of overcoming;
* no extreme napping. Again, as I've been feeling wrecked lately, I don't feel bad about resting when I need to. Some days I just lie down, sometimes I nap for an hour or so, but other days I sleep...and sleep...and sleep. 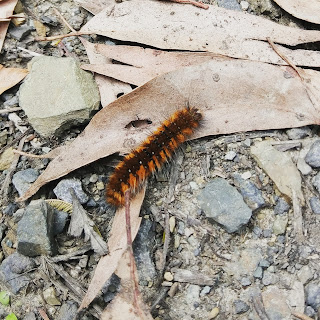