I got a comment on an old Girl in Melbourne post yesterday that has me a little excited. It was left by a fellow fan of old signs, and alerted me to an upcoming event in Melbourne called Ghost Sign Hunting ('ghost signs' is a much more evocative name for fading old signs. I shall steal it). The commenter, Stefan Schutt is one of the presenters and maintains a blog on ghost signs, which I'm keen to explore (along with the blog Ghost Signs Melbourne, which I found via Stefan's).

The seminar will explore "what ghost signs can tell us about how we live with and experience diverse cultures and histories of place and image".

It starts at 4.00pm on a week day (March 12th), but I think it will be worth arranging to finish work early to rub shoulders with a bunch of other people who are obsessed with ghost signs. It's pleasing to discover there are plenty of other people into something you like that you thought was a little bit obscure - like being part of a little community.

That reminds me, I have photos of a bunch of old signs from the past few weeks, but I've been too lazy to post them. I'll get to it soon.

Luke and I went to White Night - an all-night festival of light shows, music and performance art  - last Saturday (no, we didn't stay until stumps at 7.00am). It's the first time Melbourne has held the event and it was a huge success, if the hordes of people who descended on the CBD are any indication. It was a perfect balmy summer's night for being out and about and the vibe was buzzy.

Among other things, we visited the State Library, which a hosted a number of musical performances under the dome of the wonderful La Trobe reading room. To be honest, the performance we saw was a bit of a snooze, but I got a kick out of lining up at 11 o'clock on a Saturday night to go to the library, and the dome looked pretty. 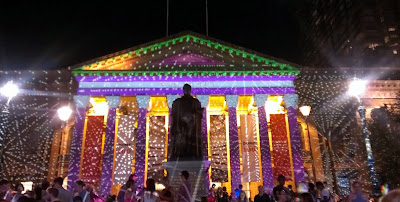 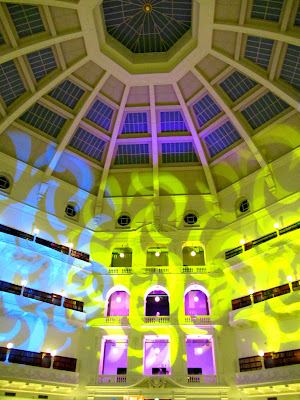 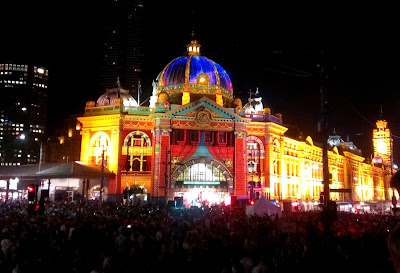 The steps of Flinders Street Station became a concert stage,
entertaining the masses 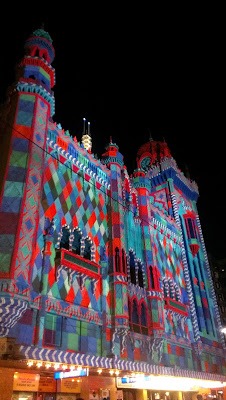 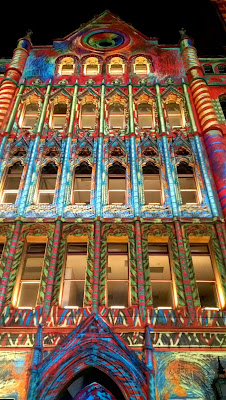 You can check out some good videos here and here, which show it off better than my photos.

We've had a lengthy run of hot, dry weather in Melbourne the last few weeks - a record- breaking spell of 15 days over 30 degrees C in fact. Even the nights have been uncomfortably warm, with temperatures in the low 20s. But it's rained the last few days. Yay!  Some proper rain, too; not just that depressingly useless drizzle we often get. How wonderful it was to go to sleep listening to the rain and wake up to rain.  It wasn't raining when I walked  home last night, but everything was still damp and I could smell the eucalyptus trees beside the river when I passed. Aaah...lovely!

Our herbs and lettuce are still alive!

We got a new TV - a digital one. We've finally entered the 21st century! Our SBS reception is still poor, however, which is disappointing. We also bought a new entertainment unit to replace our rickety old one. It's nice having new stuff. Our new furniture - entertainment unit, dining table and bookcase  - all match too, even though we bought them at different places.

I found a cool word Tumblr blog called Otherwordly via Pinterest. Continuing the theme of words ending in 'bund' (as in 'pudibund'), 'aspectabund' is an adjective meaning 'letting or being able to let expressive emotions show easily through one's face and eyes'. I think I'm going to need to take a day off work to churn through all these new blogs...

Posted by Jayne at 9:52 PM 2 comments: Links to this post 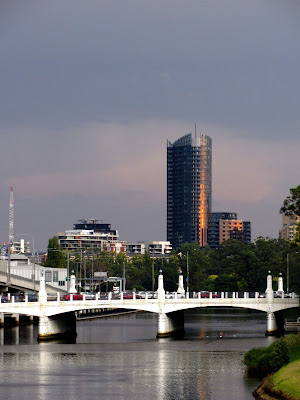 The sunset reflecting on a South Yarra building

I'm back again! Already! I took these photos on my way home tonight. The sky was slate grey and stormy, and the sun was setting. 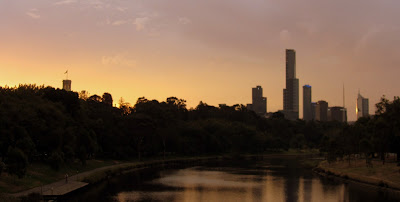 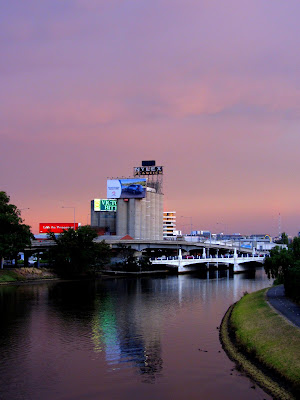 A pink tinge in the east 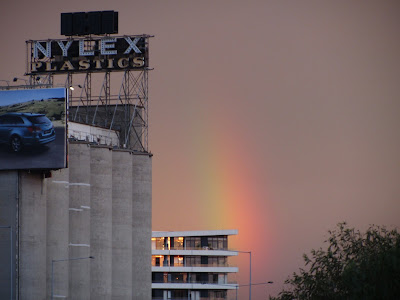 A rainbow! Or part thereof 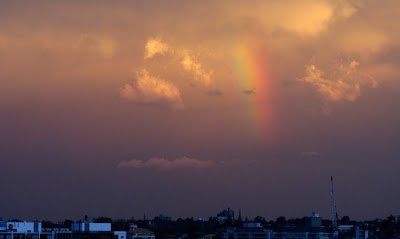 Taken from our bedroom window (yes, it needs a clean)

Not only is tomorrow Friday, but I managed to nab a spot for a free massage at work. Another perk of the job. It's good timing because my back has been sore this week. 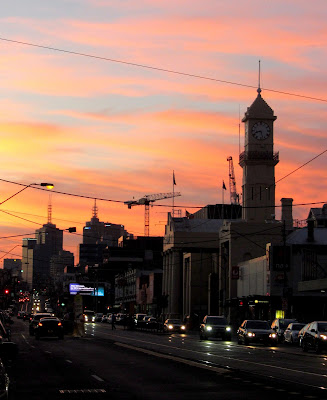 I've been slack again. I have been keeping a mental list of stuff to blog, but if I leave it any longer to write them down I'll forget them completely.

Luke and I have a herb garden! We've been buying a lot of fresh herbs lately, but not always using them all before they're past their best (which doesn't take long). So we bought some pots and seedlings and made a wee garden on the fire escape outside our kitchen. There's basil, sage, coriander, mint and some baby lettuce. Some pesky creature has had a snack on the mint leaves, but apart from that, they're doing OK. (We did only plant them on Sunday, so that's not saying much.) 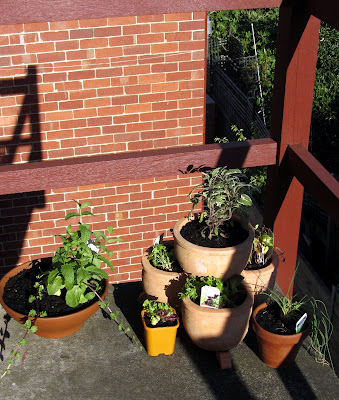 Pudibund. That's a word! It means bashful or modest. I learned this from the Inky Fool (the author, you might recall, of The Etymologicon).

Another wordy bit of glee - the Japanese term mono no aware. It refers to an awareness of the transience of things and wistfulness at their passing. Its literal translation is "the pathos of things" but, as aware is similar to our "ah" or "oh", it's also translated as the "ahh-ness of things". I'm not sure why, but I like this. Maybe because it's one of those foreign terms  that doesn't really have an English equivalent.

I've been getting a few spam comments on my blogs lately and today's was amusing. Apparently I am "just too magnificent". Sorry. I'll try less hard from now on.

The other day, I saw Mr and Mrs Plover standing right at the river's edge when a flock of seagulls flew in to land in the same area. One flew so close that Mr/Mrs Plover had to duck!

Check out these amazing and disturbingly life-like octopus cakes.

Posted by Jayne at 10:51 PM No comments: Links to this post

I've been a very lazy blogger the last couple of weeks. Gleeful things have happened - here's some snippets: 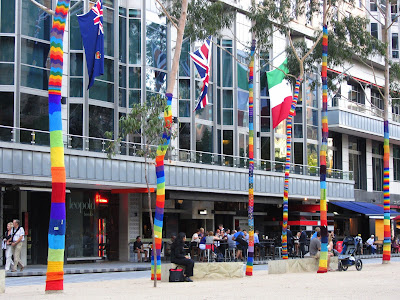 The trees in the City Square have been
yarn-bombed 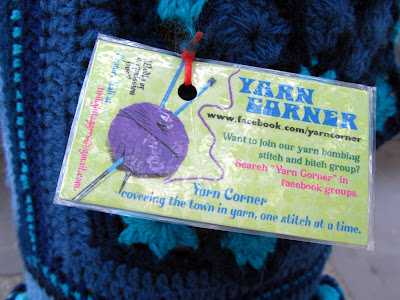 The plane trees along the Swanston
Street frontage have trunkwarmers too 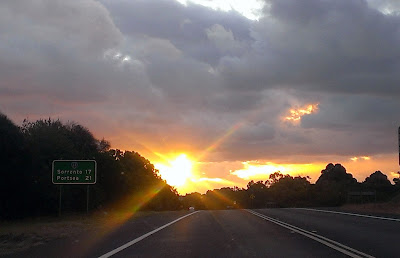 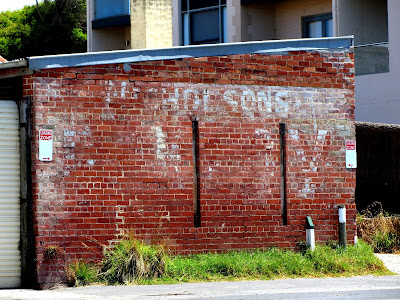 I spotted this old sign in Sorrento. Nicholson's something?
Dairy maybe? 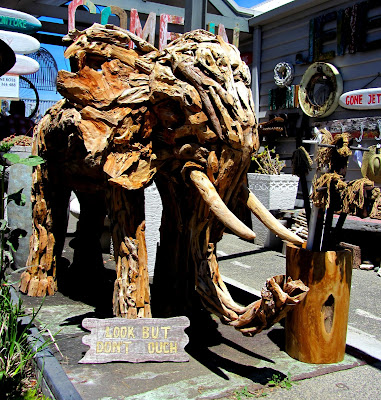 Large driftwood elephant at a shop in Sorrento 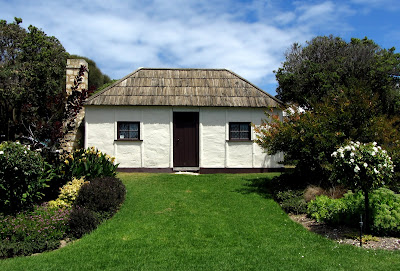 Wee cottage in the gardens at Sorrento 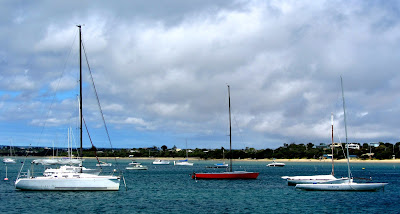 Luke's parents gave him tickets to Jersey Boys for his birthday a few weeks ago, which meant I got to go too. Woo! It's showing at Princess Theatre - I've seen shows there before, but I've never been upstairs. It's quite lovely. 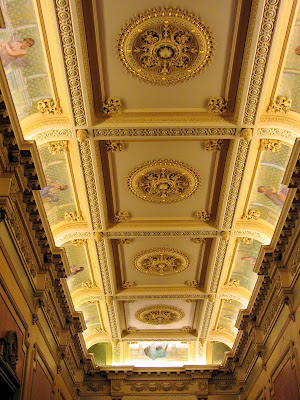 The ceiling of the upstairs foyer

We enjoyed the show. We aren't fans of Frankie Valli and the Four Seasons, but we knew most of the songs, although we didn't realise some - like Can't Take My Eyes Off You and Oh, What a Night! - were originally Four Seasons' songs. I especially liked the robotic walking dance moves the four guys did while performing Walk Like a Man. I hope they dance like that when they go to parties.

Posted by Jayne at 9:52 PM No comments: Links to this post