Not destroyed after all!

Happy news! The Bournville Cocoa sign in Armadale hasn't been destroyed! Turns out I was there before High Riser and the bit I thought was the ruined sign is actually part of the wall of the building that's been demolished. Hooray! The partial has knocked down after my visit, revealing the whole sign. I'm SO relieved! I will go back to take a photo of the complete sign soon...hopefully they don't actually destroy it or build the new wall before I get there.

I bought my quasi-nephew TJ a book called The Octopuppy for his birthday in September. I spent ages choosing the right one, and it's no surprise that I thought a book about an octopus was the right one. I chose well because his mum told me yesterday he loves it and gets his brother to read it to him "all the time".

I was so taken with The Octopuppy that I later bought a copy for myself. It's cute and makes me chuckle, plus it has a lovely message. It's about a boy called Edgar who wants a dog, but he gets a very clever octopus called Jarvis instead. He tries to train Jarvis to be a dog, but things don't go to plan. When he commands Jarvis to play dead, this is what happens: 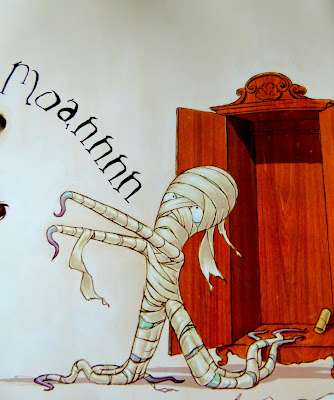 When Edgar tells Jarvis to sit... 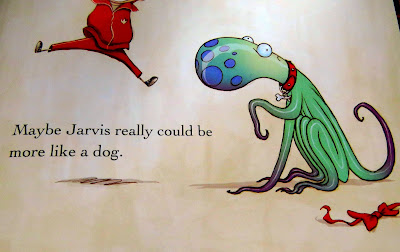 ...he thinks things are looking up (that's him jumping for joy with his head chopped off), but it's all to no avail... If you have a 3-5 year old (or a 40-something who likes octopuses) in your life, I recommend The Octopuppy.

Only five working days until holidays. If this week so far is any indication, it's going to be a very busy five days. I smashed my to-do list today and left the office feeling pleased with myself. That doesn't happen as often as I'd like.

A shop assistant at Dangerfield said my boots (the ones I bought recently on ASOS) were awesome.

Pleased to hear about the Bournville Cocoa sign. Octopuppy looks great. I will search it out for my partner Peter's grandchildren. Thanks for the review.