There was a story in The Age yesterday about the Ghost Sign Hunters seminar I'm going to tomorrow. I've never really thought too much about why I'm a ghost sign fanatic, but Stefan Schutt's comments in the story resonated with me, particularly the bit about it being a response to rapid urban renewal.

As you probably know, I love the aesthetics of urban decay. I get excited about rusting roofs, weathered wood, crumbling houses, peeling paint and old brickwork. They have so much more character than modern gleaming glass towers and boxy buildings. My obsession with ghost signs sprang from that, but I also like that old signs are a link to the past. They're survivors!  It's almost a minor miracle so many old signs are still around.

And of course there's the thrill of the discovery, which is probably akin to a collector finding a fantastic new addition to their collection while poking about in a second hand shop - only you can't take old signs home with you.

I went to the Camberwell Market yesterday, but it was too hot and too crowded so I spent the rest of the day wandering about hunting for ghost signs.  Burke Road in Camberwell was quite a disappointment, but I found a few gems along Glenferrie Road in Hawthorn. I also spotted this one: 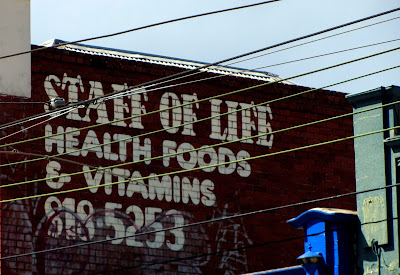 This isn't a great example of an old sign - the building isn't a health food shop anymore, but the sign isn't that old and it's still in pretty good nick. I'm only mentioning it because the Staff of Life was owned by Julie Stafford, who was my art teacher in my first years of primary school. She also published a book of the same name. I think she was one of the pioneers of the health food movement in Australia. (Stay tuned for my next post with photos of all my recent sign finds.)

I saw another circumhorizontal arc (rainbow clouds) on Saturday, only a few hundred metres from where I first saw one two years ago. I was sitting outside at my friend Lauren's engagement party at a Docklands bar when I looked up and saw it. "Oh, look! A circumhorizontal arc!" What a nerd.

I spent this afternoon cleaning out my wardrobes. Yep, I know how to make the most of a public holiday. I do love a good declutter though. It's not that long since I last did it, but there were lots of clothes I hadn't worn since my last declutter (or the one before that or the one before that etc), so I decided it was time to get brutal. In the end I wasn't quite brutal - I couldn't bear to part with a couple of things - but I was certainly harsh. My underwear and socks/hosiery drawers are so neat and organised! I'm particularly pleased with my efforts at categorising my socks, tights and stock--- yeah, I should probably stop there. Moving right along...

We're in the midst of a heatwave (Autumn? What autumn?). I've been coping by sipping on tonic with fresh muddled* lime juice and mint leaves, picked fresh from our little herb garden. Deliciously refreshing.  * smooshed with the pestle from my mortar and pestle.

I made yummy pizzas for dinner topped with tomato, bocconcini and basil also from our garden. Apart from the coriander, our herbs are thriving.

We had raspberries, strawberries and whipped cream for dessert. Nothing homegrown in that, but also delicious.