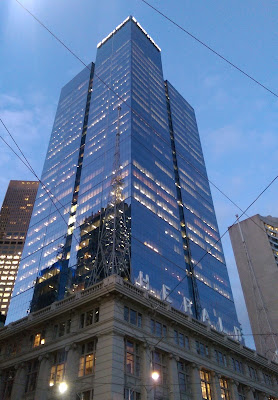 Corner Flinders and Exhibition Streets the other night

I was flicking through the TV channels on Wednesday night when I came to Raised by Wolves on SBS. I'd heard the show, written by writer/broadcaster/feminist Caitlin Moran and her sister, was very funny, so I stopped to watch it and I bloody loved it. It is HILARIOUS. Nearly every line is quotable. Funny and ridiculous and, more often than not, completely gloriously wrong, but quotable.

I'm not much of a TV watcher and thus not given to binge watching anything (except the screen of my phone), but I decided on Thursday morning I was going to spend today watching all of Raised by Wolves. I realised after two episodes that binge watching is not my thing though, no matter how much I love a show. I was feeling restless and ready to get up and do something else, but I persevered (lying in bed watching TV is such hard work) and watched all of the first series, which is only six episodes long. Then I went back to sleep (I hardly got any sleep last night, but not for any fun reasons).

End of month drinks at work happened last night because of today's public holiday. I wasn't planning to go because I'm anti-social and still feeling poorly, but it was a friend's last day with the firm so I went and it was fun and now I wish it always happened on the last Thursday of the month.

I've been completely off anti-depressants for about two weeks now and I'm still happy as a pig in poop. Yay.
Posted by Jayne at 12:13 AM